A charming bouquet of sweet berry fruit and cherry, with hints of spice, flower and mineral. Intensely flavoured and concentrated on the palate with notes of spice, forest floor and ripe fruit. Succulent acidity gives this Pinot a long, juicy finish.

Baden. The southernmost of Germany's wine regions is primarily a long, slim strip of vineyards nestled between the hills of the Black Forest and the Rhine River, extending some 400 km from north to south.

Comprised of nine districts with a total planted area making up 15,400 hectares under vine, Baden also has many soil types and grape varieties to its name. Nearly half of the vineyards are planted with Burgunder (Pinot) varieties: Spätburgunder (Pinot Noir), yielding velvety to fiery red wine and refreshing Weissherbst (rosé), ranging in style from dry to slightly sweet; Grauburgunder (Pinot Gris), a dry, food-compatible wine, or marketed under the synonym Ruländer to denote a richer, fuller-bodied (and sweeter) style; and Weissburgunder (Pinot Blanc), neutral enough to accompany many foods. Spicy Gewürztraminer and the noble Riesling are specialties of the Ortenau district near Baden-Baden, where they are known as Clevner and Klingelberger, respectively. Light, mild Gutedel (synonymous with the Chasselas of France and Fendant of Switzerland) is a specialty of the Markgräflerland district between Freiburg and the Swiss border. 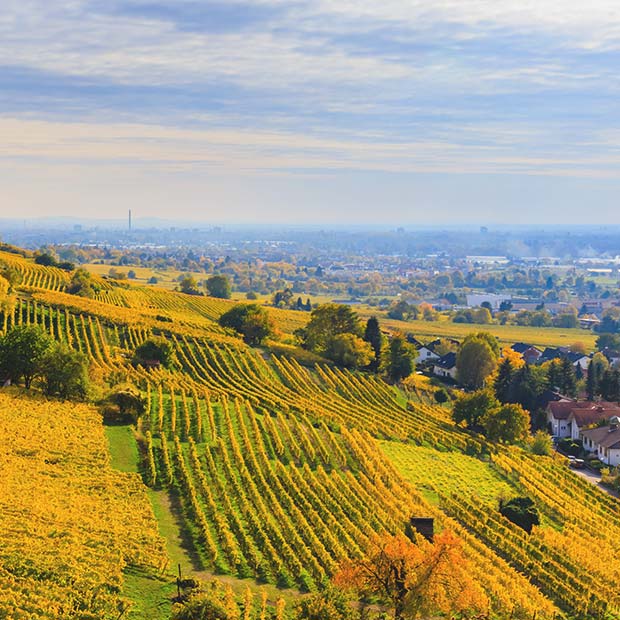 About the brand Huber

Located in Baden, Germany's most southerly wine region, Bernhard Huber and his wife began bottling their wines in 1987 after taking control of the family estate. Previously, Huber's father had sold grapes to the local cooperative. Now, his wines are recognized among Germany's finest.

The vineyard area totals 26 hectares with holdings in Bienenberg (Malterdingen) and a handfull of other sites. 70 % is planted with Pinot Noir, known as Spatburgunder in Germany, while the rest is Chardonnay, Pinot Blanc, Pinot Gris and a handful of indigenous varieties. With Burgundy as a model and its winemakers as mentors, Huber evolved his winemaking style to emulate that great region; using whole bunches in ferments, limiting yields to increase concentration, procuring French oak from Francois Freres and acquiring up to fifteen Burgundian Pinot Noir clones to blend with his German ones.

Sadly, Bernhard Huber passed away in 2014, but his incredible vision and contribution to German wine and to Pinot Noir as a varietal is not loosing speed anytime soon.