This is the third vintage of Grüner Veltliner, an Austrian variety that we have totally fallen in love with. If you haven't tried this variety before, think steely dry Riesling combined with the texture and luscious deliciousness of a Pinot Gris! Fresh, zesty lemon/lime and grapefruit with a spicy herbaceous pepper element and a pop of acidity. Grown in the Wangolina vineyard in Mt Benson, we are fortunate to have the only Grüner Veltliner in the Limestone Coast

Mount Benson is a unique coastal geographical indication situated approximately 300 kilometres from Adelaide and halfway between the historic townships of Kingston SE and Robe in the south-east of South Australia. As part of the greater Limestone Coast wine region, Mount Benson is cousin to other well-known winegrowing regions including Coonawarra, Padthaway, Wrattonbully, Penola, Mount Gambier and Robe.

With the region’s first grapes planted in the 1980s, the local farmers were well attuned to Mount Benson’s unique and rugged climatic conditions. These grapes would later make way for the region’s own style of delicate, cool-climate, maritime-influenced wines which have already begun to make waves within a very competitive Australian wine industry. This is the sense of place wineries in the region aim to convey in each bottle of wine they produce. 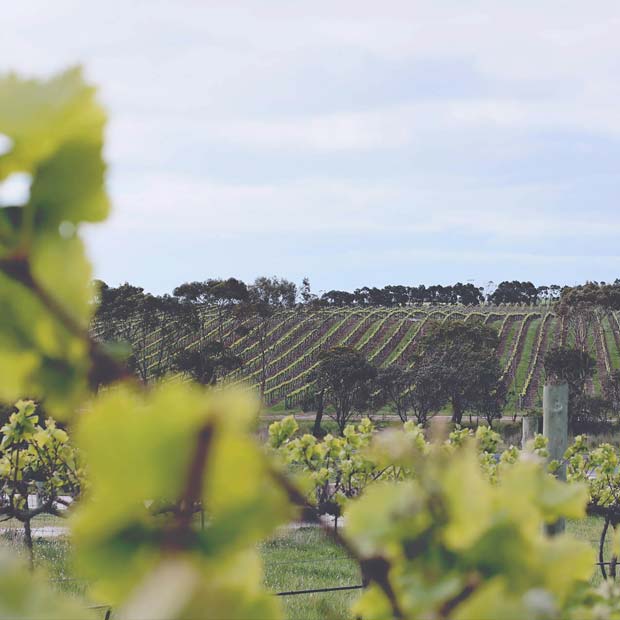 Our vineyard is situated in the Hundred of Mt Benson as they used to say, on Limestone Coast Road, Mt Benson. Established in 1999 by John & Anita Goode with plantings of Shiraz, Cabernet Sauvignon, Semillon & Sauvignon Blanc, the vineyard has now expanded to include Pinot Gris, Grüner Veltliner and Malvasia Istriana (which is super exciting).

The terra rossa soils (red sandy loam over limestone) provide the ideal soil conditions for vine growth, plentiful supplies of fresh subterranean water which filters through the limestone and the temperate climate, which is moderated by the influence of a Great Southern Ocean, all providing excellent conditions for vineyards to thrive and produce high quality wines. Our vineyard is located approximately 12kms as the bird flies from the sea at Cape Jaffa.

Mount Benson is a unique coastal geographical indication situated approximately 300 kilometres from Adelaide and halfway between the historic townships of Kingston SE and Robe. The Mount Benson wine region is a part of the greater Limestone Coast wine region within South Australia. The region and area were named by Charles Bonney who named the highest physical landmark 'Mount Benson' after one of his stockmen, Harry Benson.

The region’s first grapes were planted in the 1980's by local farmers well attuned to Mount Benson’s unique and rugged climatic conditions. These grapes would later make way for the region’s own style of delicate, cool-climate, maritime-influenced wines.