Hand harvested fruit was firmly whole bunch pressed to impart some skin contact to release the full flavour profile and impart some phenolic texture. Natural ferment occurred in new (24%) and older French barrels. The wine was left to unwind and age slowly on its ferment lees to add generosity. Every barrel was treated as is own entity, with some allowed to go through natural Malolactic fermentation to add further depth. After 11 months the wine was racked and filtered prior to bottling in February 2021.

Located less than an hour’s drive from Melbourne, the Macedon Ranges is a wine region comprising elevated plains and parts of the Great Dividing Range and the Central Victorian Highlands. Home to over 40 wineries, this wine region is probably most well known for their Pinot Noir and Chardonnay infused sparkling wines. The wineries at Macedon Ranges are known to produce high quality wines that are limited in quantity.

The Macedon Ranges are the coldest grape growing region in mainland Australia because of its cool to cold temperatures due to the fact that the ranges are 400-700 meters above sea level. The Great Dividing Range makes a natural watershed dividing the region into two separate but related areas. Both of these areas have a base of volcanic soil and have heavy amounts of winter rain, and the long and cool summers and autumns hold perfect conditions for extended ripening periods of fruit. The southern areas of Gisborne, Lancefield and Romsey create high quality wines from early ripening varieties, such as Pinot Noir and Chardonnay. The northern areas of Kyneton, Metcalfe, Taradale, Malmsbury, Springhill, Glenlyon, Daylesford, and Yandoit tend to produce amazing full bodied shiraz, Riesling and Merlot.

The grapes grown in the Macedon Ranges hold an unbelievable mix of bright acidity and steely backbone with intense flavor which creates a harmonious balance between alcohol, acidity and fruit complexity which makes the wines from this region a great choice for all kinds of food pairings such as beef tartare, and duck breast. 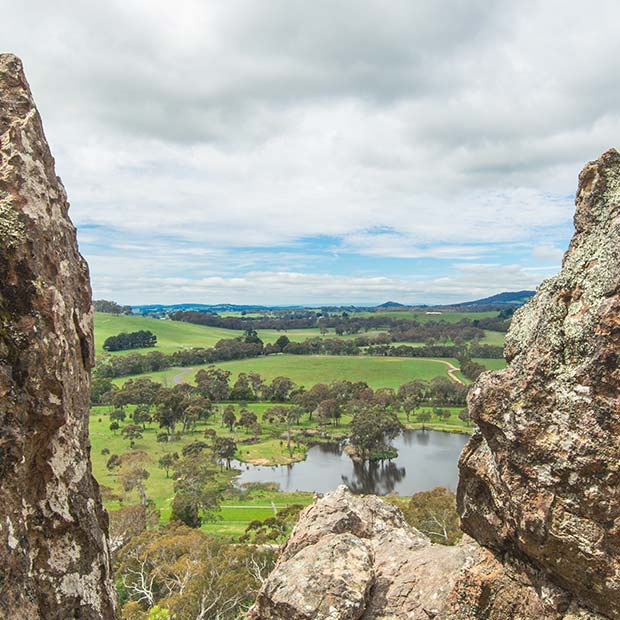 About the brand Shadowfax

Established in 1998, Shadowfax is a boutique winery located just 30 minutes from Melbourne, in the heart of Werribee Park. Dedicated to creating high quality and handcrafted wines, our renowned varieties include Pinot Noir, Chardonnay, Pinot Gris, Riesling and Shiraz as well as a selection of highly limited, single-vineyard wines.