0 Reviews
SKU
RVEZ201512 UCAU
Ridge Vineyards is a famed Californian wine producer founded in 1962, and based in the Santa Cruz Mountains, but with vineyards in several parts of the state. Its flagship wine, Monte Bello, is a Cabernet Sauvignon-dominated Bordeaux blend known for delivering the complexity and elegance of Bordeaux wines, as well as typical California fruit intensity. It is also well known for its range of Zinfandel wines and Zinfandel-based blends, led by the Geyserville cuvée. Wines made from Petite Sirah, Carignan and a Grenache – Mataro blend have also been longstanding features in the range, and Ridge has made a small amount of Chardonnay each vintage for many decades.
Read More
Skip to the end of the images gallery

Within California’s Central Coast American Viticultural Area (AVA) is the Santa Cruz Mountains AVA. The area sits on the coast of the Pacific Ocean between the major cities of San Francisco and Los Angeles. The Santa Cruz mountain range itself – part of the Coast Range – sits between the ocean and the vineyards, shielding the grapes from the cold, wet, foggy conditions coming off the water. Grapegrowers plant many of the vineyards at higher altitudes – to nearly 800 metres; this elevation provides a moderating influence on hot daytime temperatures, with cooler night-time air making its way down the slopes, forcing the warmer air upwards. This diurnal phenomenon also helps mitigate frost. The Santa Cruz Mountains AVA comprises three counties: Santa Clara, Santa Cruz, and San Mateo. The three most prominent varieties here are Cabernet Sauvignon, Chardonnay, and Pinot Noir. The AVA’s eastern side enjoys warmer temperatures, making it also well-suited to Zinfandel, Cabernet Sauvignon, and Merlot. 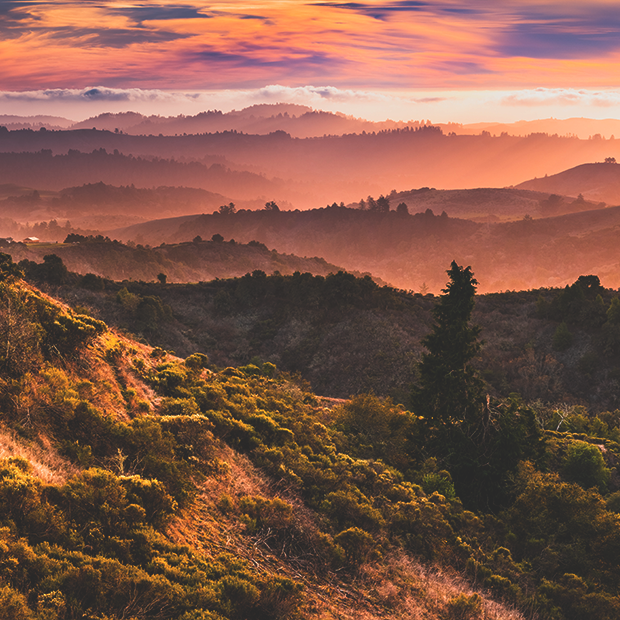 About the brand Ridge Vineyards

The history of Ridge Vineyards begins in 1885, when Osea Perrone, a doctor who became a prominent member of San Francisco’s Italian community, bought 180 acres near the top of Monte Bello Ridge. He terraced the slopes and planted vineyards; using native limestone, he constructed the Monte Bello Winery, producing the first vintage under that name in 1892. This unique cellar, built into the mountainside on three levels, is Ridge’s production facility. At 2600asl, it is surrounded by the “upper vineyard”, now referred to as the Perrone Ranch.
At Ridge Vineyards their belief is of that modern and increasingly industrial wines lack the complexity, the sense of place, and the ability to age and develop that pre-industrial wines demonstrated. Today their winemaking techniques date back to the 19th Century – to methods used in the finest California wineries such as La Cuesta, and in the Bordeaux chateaux of that era.
Their winemaking philosophy includes fermenting entirely with native yeasts from the vineyard, rather than cultured yeast strains; extracting colour, flavour, and tannins from the grapes without use of commercial enzymes; determining – by tasting for tannin extraction during fermentation how long to continue pump-overs; allowing malolactic fermentation to occur naturally, without inoculation; achieving wine clarity through settling and racking; making major winemaking decisions, including blending, are based on tasting rather than a pre-determined recipe. These winemaking techniques have been employed at Ridge for over fifty years, with the goal of making the best, most site-specific wines possible. The starting point is (of course) having great vineyards.
Ridge Vineyards were blessed by finding and acquiring the 125-year-old Monte Bello vineyard. Abandoned after Prohibition this site and its now-sixty-year-old cabernet vines were replanted in the late 1940s. Searching for the best, most expressive sites, they made their first zinfandel in 1964 from eighty-year-old vines. In 1966 they also made their first Geyserville- from vines that are now one hundred and thirty years old – and have made it every year since. 1972 marked their first Lytton Springs, from vines planted in 1902. Over the following years, they realised that those two, out of more than fifty old-vine zinfandel vineyards they have worked with, were producing the highest quality wines – most complex and consistent in their individual character.
In 1990, they took over the Geyserville vineyard on a long-term lease with right of first refusal. In 1991 and 1995, they acquired the eastern, and then the western, portion of the vineyard lands first planted by “Captain” Litton in the 1870s. They, with Monte Bello, make up their three estate vineyards. Farming them sustainably, they attempt to carry the soil, the microclimate – everything affecting the site – into the wine, and to gain a true sense of place.
Today, the three provide 75% of the fruit we use, and they will soon be organically certified. That means we use cover crops, integrated pest management techniques, mechanical weed removal, and composted grape pomace in place of pesticides, herbicides and synthetic fertilizers.