0 Reviews
SKU
NUAS201810 UCAU
This Passo Appassimento is sourced from premium vineyards in the Riverina. A parcel of our ‘Dried Grape Shiraz’ was used to create flavour, intensity and concentration. After fermentation, the wine was matured in French and American oak for 18 months resulting in a handcrafted wine of quality. Several years in bottle have softened and rounded the wine making it even more complex.
Read More
Skip to the end of the images gallery

The Riverland is a literal giant within the Australian wine industry.

As the largest wine producing region in Australia, it is located a little over two hours north-east of Adelaide and stretches west along the Murray River from Paringa to Blanchetown

Long sunny days, cool temperate nights, and low annual rainfall give rise to a continental style climate of warm summers and mild winters. The endless sunshine of long summer days allows fruit to ripen to its fullest and low humidity means the risk of disease and rot is almost zero. It is the perfect place for growing wine.

With European immigrant influences dating back to the late 1800’s and early 1900’s, the Riverland is home to plantings of some 85 different wine grape varieties. These plantings consist of both traditional varietals, which make up 66% of the total grapes grown in the region, and many alternative varieties that make up the rest and are particularly well suited to the Riverland region. Now more than 30 new wave varieties are produced at a commercial scale. 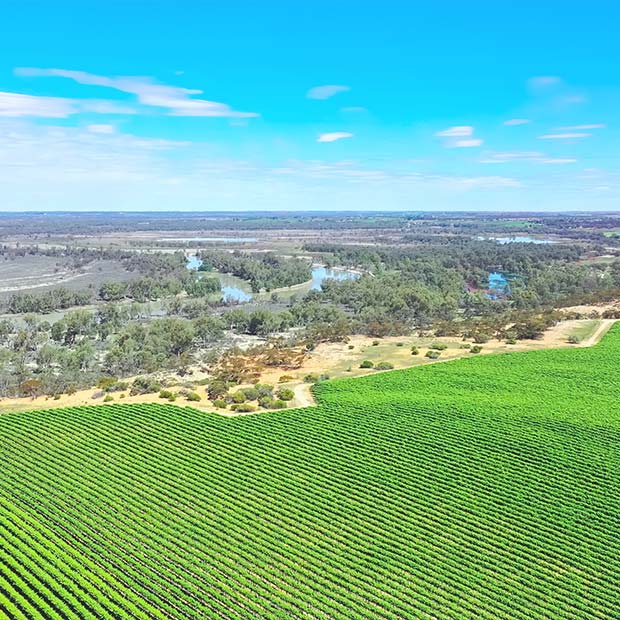 About the brand Nugan Estate

Nugan Estate is a top 20 wine producer and the 13th largest exporter of branded wine in Australia. The story of Nugan Estate spans 80 years, three generations, and displays determination, passion and grit. In 1938, Alfredo and Annelise Nugan fled their home village of Alcira, Spain and migrated to Australia. As immigrants they brought with them aspects of European culture including the enjoyment of wine.