Aromas of blackberry, fruits of the forest, red toffee apple, roast beetroot, smoky paprika and Dutch cocoa. The palate shows red toffee apple and blackberry on entry followed by cocoa and paprika, finishing with Touriga’s signature fruit mince and plum pudding. There is tension to the texture from a firm spine surrounded by generosity. The tannins ripple and repeat, folding back on themselves. 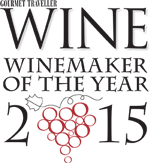