Equipo Navazos, created in 2005 by Jesús Barquín and Eduardo Ojeda goes from strength to strength releasing unique, small lots of old rare Sherries and their regular Fino and Manzanilla that are among the best in their class. On top of that, they have joint-ventures with producers from other regions to produce sparkling wines, table wines and even small lots of very old brandy and rum that are beyond the scope of this article but are well worth pursuing. What started as a hobby with a group of hardcore fans of traditional Andalusian wines has turned into a steady business with around 30,000 bottles of wine being released per year. I keep buying and cellaring their wines as part of the initial hard core of fans for whom the private project was created.

The DOC of Jerez-Xérès-Sherry lies between the three cities of Jerez de la Frontera , El Puerto de Santa María and Sanlúcar de Barrameda in the southwest of Spain. The region is known for its Sherries, which are exported worldwide.

The chalky white soils of the region suit the Palomino Fino grape variety, where it thrives. Pedro Ximénez is often added to sweeten up the Palomino Fino Sherry wines, though is also made in single varietal, naturally sweet wines and referred to as PX.

Dry white wine is fermented and a grape spirit is added to make Sherry. Blending through a system of barrels (the solera system) where barrels vary from new to very aged can impart a taste of an ‘old wine’ in quite a young wine. The age that a wine spends in the solera system will vary depending on sweetness and quality levels aimed for by the winemaker, and will affect the final cost of the wine.

The range of Sherry styles available is quite wide from the Dry Fino style, Manzanilla, Amontillado, Oloroso, Palo Cortado to sweeter aged Sherries.

Vinegar and Spirits are also exported from the Jerez region, which in recent years has suffered economically such that in 2012 it was recognised as Spain’s most indebted commune. Producers like Sánchez Romate are certainly worth trying. 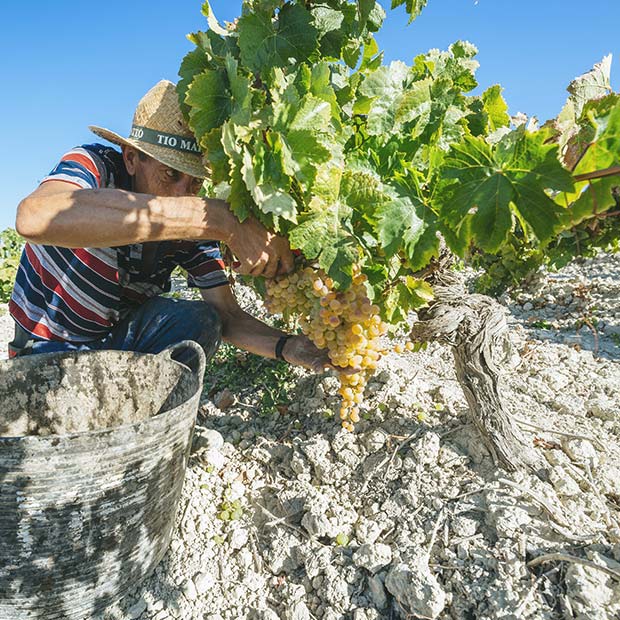