The Dr. Loosen Wehlener Sonnenuhr Riesling Kabinett reveals aromas of ripe apples and pears in a golden yellow colour. Passionfruit, pomegranate and smoky-salty notes complete the mineral bouquet. Fresh, tangy, soft on the palate, with a mineral pressure and a sparkling finish.

Mosel to make it a name considered more consumer-friendly. Mosel is one of 13 wine-growing regions in Germany and is located in the South-Eastern corner of the country along the Mosel River, from which the area was named.

Along with most of Germany, the region has a northern continental climate, so the key here is to get as much sun exposure on to the vines, else they won't ripen. For this reason, grapes are grown only on certain slopes along the Mosel river, as across the river on the other side, there is simply not enough sunlight for the grapes to grow. The steep slopes along the Mosel River makes some of the vineyards the most labour intensive in the world. No machines can be used on the steep slopes that are so dangerous they have claimed the lives of some vineyard workers.

The wines from the upper Mosel are characterised by low alcohol levels (6-9%). Wines of middle Mosel are some of the finest examples in all of Germany, perfectly balanced and poised. Top wines are known to comfortably cellar for 50 or even 100 years!

Most all Mosel wines are packaged in green 'Hock' style bottles and a key characteristic of all Mosel wines is their normally high-acidity and clearly defined flavours. Riesling is the king of the Mosel region where anything from dry to delicious dessert wines are made. 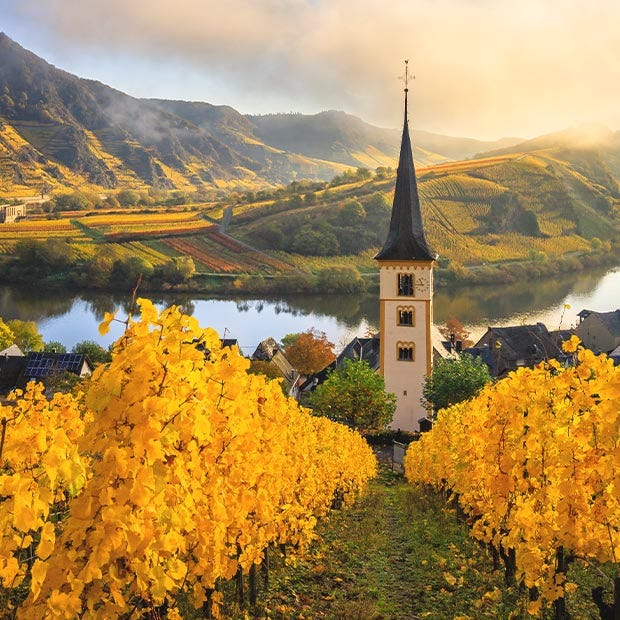