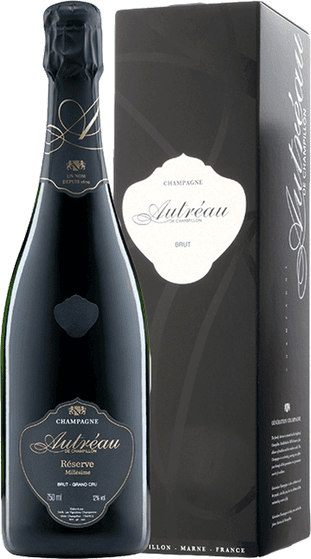 100% Grand Cru fruit from the villages of Chouilly and Ay. Only produced in exceptional years, of which 2014 was most definitely one. Chardonnay dominant, showing gorgeous white flowers, green apple and sweet caramel popcorn. A small percent of Pinot Noir adds a savoury complexity. Matured on lees for 5 years before release which adds layers of complex brioche and toast flavours as well as a persistent, fine bead of bubbles.

The family Autreau is an old family from Champillon - ancient documents certify their presence since 1670. This family is linked to the farming of the land and to the Champagne production as far back as it goes - the beginning of the 18th century when Dom Perignon found bubbles in his wine.

About the brand Champagne Autréau

Since 1670, the Autréau’s family has perpetuated fine Champagne from the heights of Champillon. They own Grand Cru vineyards of Chardonnay, Pinot Meunier and Pinot Noir in Aÿ and Chouilly. The family is linked to the farming of the land and to the Champagne production as far back as the time when Dom Pérignon found bubbles in his wine. A vast and beautiful vineyard of 30 hectares is divided in the best Crus of the Côte des blancs (White Hillside) and the Vallée de la Marne (Marne Valley.) Chardonnay grapes come from 5 hectares of vines situated in Chouilly, a Grand Cru soil from the Côte des Blancs and Pinot Noir comes from the Vallée de la Marne. Pinot Meunier, over 14 hectares is also grown in the Vallée de la Marne. United Cellars are proud to bring Champagne Autréau to Australia. Their Premier Cru and Grand Cru offerings are outstanding