BlackJack Vineyards is situated on the granitic soil of the Harcourt Valley in the Bendigo wine region of Central Victoria. BlackJack was the name given to an American sailor who, during the Gold Rush era of the 1850s jumped ship and found his way to the Castlemaine Goldfields. A road adjacent to BlackJack Vineyard still bears his name. Perhaps following a similar dream but in search of liquid gold, Ian McKenzie and Ken Pollock and their families planted their first vines on an old apple orchard at Harcourt in 1988. Further planting in 1989 completed the initial four hectare vineyard development of mainly shiraz and cabernet sauvignon with a small area of merlot as well. More shiraz was planted in 1998 on what has become known as Block 6. Part of this block is on Castlemaine sandstone gravel rather than the very old granitic soils on the rest of the property. The different soil profile and different clonal material gives Block 6 Shiraz what we see as more Rhone - like Characters. BlackJack Vineyards released its first wine in November 1994 and in the short period since has established an enviable reputation for producing fine and generous red wine. BlackJack has twice won the trophy for best shiraz at the Royal Melbourne Wine Show in 1996 for its 1994 shiraz, and in 2004 for its 2002 Block 6 Shiraz. The latter wine also won the Premier's Gold Trophy for the best Victorian wine of the show.

Located 150 kilometers north west of the state capital, Melbourne, the Bendigo region is renowned for producing wines of intense flavour, which is supported by its superb climatic and geographical conditions. The rich gold-bearing soils and wine grapes of the region are also the ideal pairing for producing high quality premium wines.

The land conditions of the Bendigo region are quite unique, consisting of volcanic plains, alluvial flood plains, rolling granite hills and sedimentary rises. The region also shares the same climate, in terms of wine production, to the Barossa, Clare, and Goulburn Valleys.
While the region produces a wide array of wines, plantings of red grape varieties predominate over white. Red grape varieties include Cabernet Sauvignon, Pinot Noir, Merlot, Cabernet Franc, Malbec, Malaro, Sangiovese and Touriga. White grape varieties include Riesling, Semilon and Traminer. The most dominant red variety is Shiraz, and the dominant whites are Chardonnay and Sauvignon Blanc. 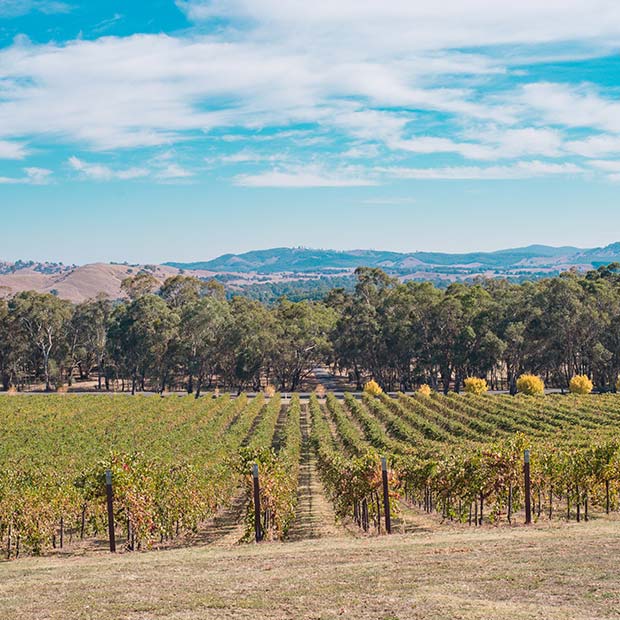